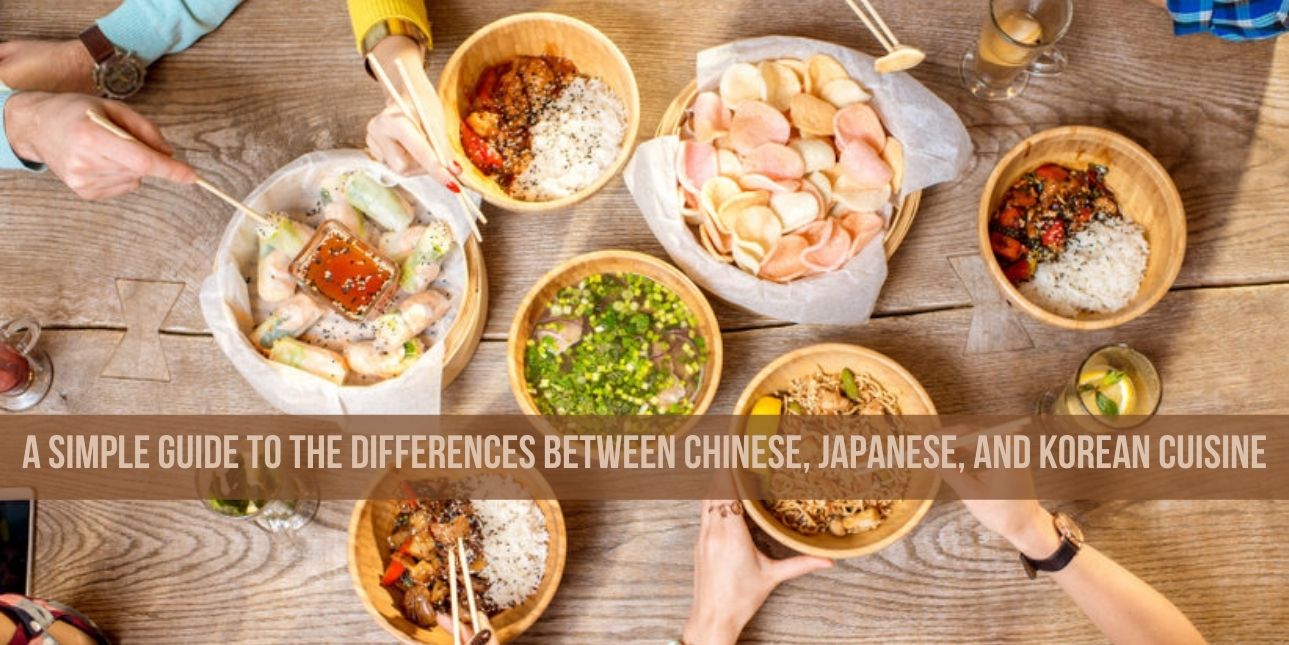 Whether you prefer sushi, fried rice, or japchae, it’s quite obvious that food from the far-east has given us all a lot to relish. Given that cuisines from China, Japan, and Korea have taken over the food scene across the globe, it’s easy for non-natives to become confused between the three. While the three cuisines may have a fair amount of similarities and common elements, they’re distinct and bear with them a completely different evolutionary path, culinary philosophy, and execution. The differences also extend into the materials used, the methods of cooking, and condiments - resulting in very different tastes and textures.

We all love food that comes from the far east, whether it’s the humble sushi, an extravagant plate of Kung Pao chicken, or a delicious serving of Bulgogi. Cuisines are an integral part of the culture of a region, and they develop along with civilization - displaying the culture’s beliefs, traditions, and history. Cultures develop their idea of food, how it should be made, and what it should taste like. Right from natural predicaments to influences stemming from globalization, a plate of ethnic food is nearly history & geography on our taste buds. Since cuisine from the eastern portion of Asia is so loved, it is not uncommon that people tend to confuse the dishes and their countries of origin. To help you understand the differences between Japanese food vs. Chinese food, the variations observed in Korean food vs. Japanese food, and also the notable dissimilarities in Korean food vs. Chinese food, we’ve put together a simple guide. Read on as we detail the specifics of these cuisines and what makes them distinct.

Japanese, Chinese, and Korean delicacies are all shaped by their respective cultures’ outlook toward food and life in general. A lot of the food coming out of these countries is considered healthy and reflects the holistic approach these cultures take toward food and eating. It is also important to note that natural elements have the greatest impact on food habits and on what people eat. Geography dictates what grows in a particular area, and what doesn’t. This plays a major role when discussing the differences between Japanese food vs. Chinese food, or the distinction between the former and Korean food.

Japanese Naturalism: What is Japanese cuisine? Because Japan is an island nation, it is obvious that it has an abundance of seafood - a source most Japanese people depend on for their proteins. The Japanese isles are relatively small, and a lot of them have hilly & mountainous terrain. This led to the formation of short, yet rapidly flowing rivers. Fast flowing water is not very muddy and does not contain too many impurities. This helped Japanese cuisine evolve into a platter that is composed of raw, boiled, and lightly seasoned delights. It reflects the natural heritage of Japan, and its advantage of having an abundance of clean water. The Japanese idea of food is centered around picking the freshest items and making as few modifications to them as possible to help the eater taste the real texture of food. A lot of food on an authentic Japanese restaurant’s menu would be grilled, boiled, or remain in its raw form. This is a reason why Japanese cuisine is mellow, not spicy, and considered extremely nutritious.

The Korean Melting Pot: Korea on the other hand, is a peninsular region, and like Japan, has unbounded access to the sea and hence, seafood. However, Korean cuisine incorporates a healthy amount of meat, spices, and other condiments into its cuisine, thanks to sharing a direct land boundary with the rest of Asia over the ages. Korean food has an abundance of fermented elements. The popular Kimchi can be instanced when enumerating the differences between Korean food vs. Japanese food, and also between Korean food vs. Chinese food. The peninsula also uses several cooking methods like frying, stir-frying, and even barbecuing, ever since American influence began percolating into the nation.

Chinese Diversity: China, distinct from the former two countries, is a very vast nation, and comprises several regions that are very different in geography as well as history. So when we refer to Chinese cuisine, we talk about a vast array of foods coming from multiple cultures and locations that are generalized under an umbrella term. But, given the commonalities and shared principles in a number of these foods, it makes sense to discuss Chinese cuisine as a whole for the sake of simplicity. China, in contrast with Japan and Korea, has some of the world’s longest rivers. Slow flowing rivers carry with them a large amount of impurity, and there’s a necessity for the water to be cleaned and boiled before consumption. Chinese food incorporates a lot of frying and stir-frying since the cuisine and culture have adopted several sources of proteins - including exotic meats. These foods often require thorough cooking processes. Authentic Chinese food also involves a fine balance of several spices - an important indicator of historical trade. The Chinese approach to food involves making things edible, rather than making minimal changes to natural composition - a core difference of perspective in Japanese food vs. Chinese food.

The Differences Between Japanese Food vs. Chinese Food 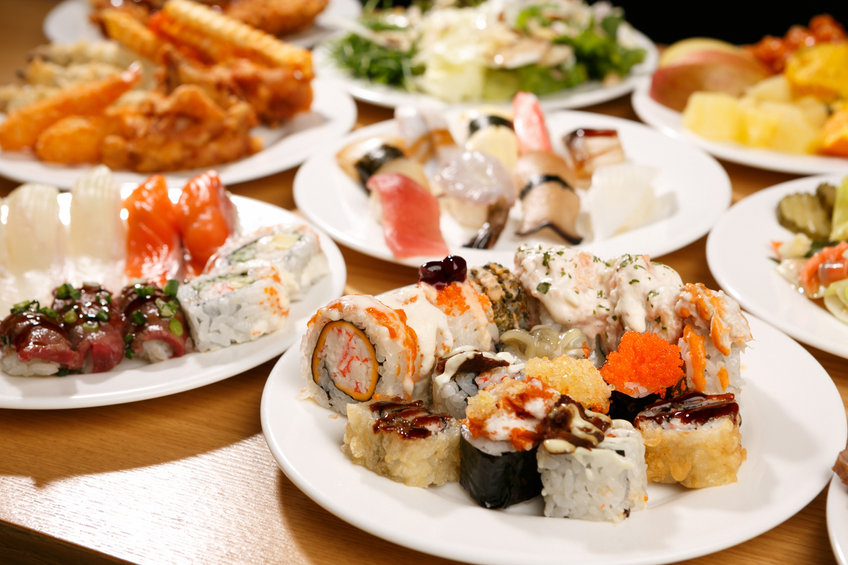 Chinese cuisine is so popular that it can be found nearly everywhere, however, most regions in the world have modified the recipes to suit local tastes. Authentic Chinese cuisine, on the other hand, involves a vast array of cooking techniques, meats, spices, and condiments. If you’ve wondered about what is the main difference between Chinese and Japanese cuisine, the answer encompasses several aspects, but the most important distinction is the level of spice used. While Chinese cuisine tends to be fairly spicy, involving a large number of local blends of spices like five-spice powder, the Japanese keep it simple and mild. Chinese sauces include the hot Doubanjiang and Tianmianjiang, whereas Japanese condiments entail simple vinegar and dashi to name a couple. The vast landmass of China has made it easy for people to come across a number of different cattle varieties and exotic animals - all of which are used in different dishes. On the other hand, the Japanese have a relatively small amount of cattle-meat consumption and instead fixate on seafood. Another difference between Chinese and Japanese food involves the techniques used by chefs to prepare their respective cuisines. Chinese culinary arts involve complex and drawn-out food preparation and require a dedicated Chinese restaurant supply, as the food involves a complex dance of several elements. This also includes the preparation of sauces and condiments to add taste to the prepared food. As stated earlier, Japanese dishes rely heavily on bringing about the natural tastes of food, however, an important element in the mix is aesthetics. The Japanese are very particular about the presentation, and spend a copious amount of time making food look fresh, attractive, and appetizing. Japanese chefs spend several years training in the arts of cutting, slicing, and dicing. These elements necessitate refrigerated sushi display cases in restaurants that intend on serving Japanese cuisine. This will help them preserve the food, and also present it using traditional norms.

Both Korean and Japanese cuisines are celebrated across the world. However, it’s quite easy to become confused between the two. Both cuisines make use of soy sauce, however, the Korean take on the condiment is darker, and has a stronger umami taste. Korean cuisine also incorporates a healthy dose of oyster sauce in several dishes to give the food a rich flavor. Japanese food limits itself to minimal spices and condiments to preserve the freshness of the materials used, and also to retain texture. While foods like tempura might be exceptions in the fact that they use extensive cooking processes; most Japanese cuisine is centered around mild flavors with minimal manipulation. However, their neighbors to the southwest tend to marinate their food in a rich blend of spices to make things more interesting. Fermented dishes like Kimchi are used as sides or to add flavor to other dishes, whereas fermented foods in Japan include tempeh and miso. Popular Japanese dishes include Sushi, Sashimi, Ramen (in casual settings), Sukiyaki, and Miso soup. On the other hand, Korean favorites include Samgyeopsal, Gopchang, Kimchi stew, and Korean barbecued meats. There also exist differences in the types of chopsticks used for Korean food vs. Japanese food. While the former requires metal chopsticks, the latter incorporates the use of wooden chopsticks often with a piece of art on them. 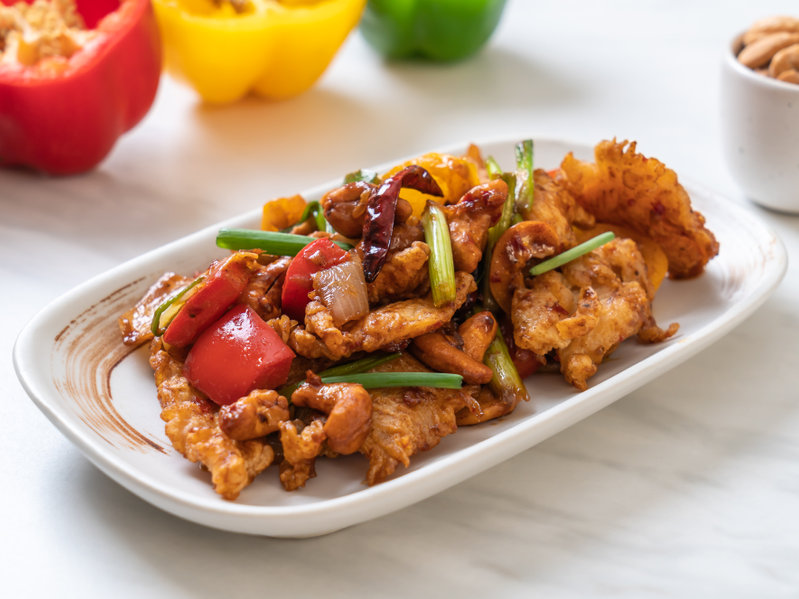 Despite several commonalities in cuisine, it’s important to note that these features are merely superficial when it comes to Korean food vs. Chinese food. Though rice is a staple in Korea and China (also Japan), Koreans use short-grain rice, whereas their neighbors prefer long-grain rice to cook with. Chinese cuisine regularly deploys the use of alcohol in its cooking, often a variety of rice wine, however, such a technique in traditional Korean cuisine is absent. Alongside rice, the popularity of noodles in both nations cannot be understated. In the case of China, a few regions in the nation use rice noodles (especially Canton), while Korean cuisine exclusively uses alkaline wheat noodles for its preparations like Naengmyeon. Sweet potato starch noodles are an important staple in Korean cuisine - an element not found in its Chinese counterparts. Even in the use of meats, the cuisines are fairly dissimilar. Pork and beef are quite common in Chinese cuisine, whereas in the case of Korea, chicken and seafood are preferred, however, there exist a variety of pork and beef dishes too. The usage of fermentation brings about another contrast in these rich cuisines as well. The Korean peninsula has a rich tradition of fermenting, pickling, and using raw vegetables extensively in its palate, whereas the Chinese prefer roasts and stir-fries to the sour and umami goodness of fermentation. Restaurants offering Korean dishes also require dedicated Korean kitchen supplies to help them serve preferred classics to their customers. The advent of multiculturalism and global immigration has led to a rich amalgamation of both cuisines. Korean Chinese food is becoming increasingly popular and brings about the culinary heritage of both nations to create an array of rich delicacies.

Whatever your preference, understanding the differences between Japanese, Chinese, and Korean food is important to help you expand your menu, while being mindful of the subtleties involved. The culinary cultures of these nations involve a variety of traditional methods and tastes unique to them, and demand the requisite respect if we are to emulate them in our kitchens. Each culture brings with it a rich history, and it's often served on a plate.