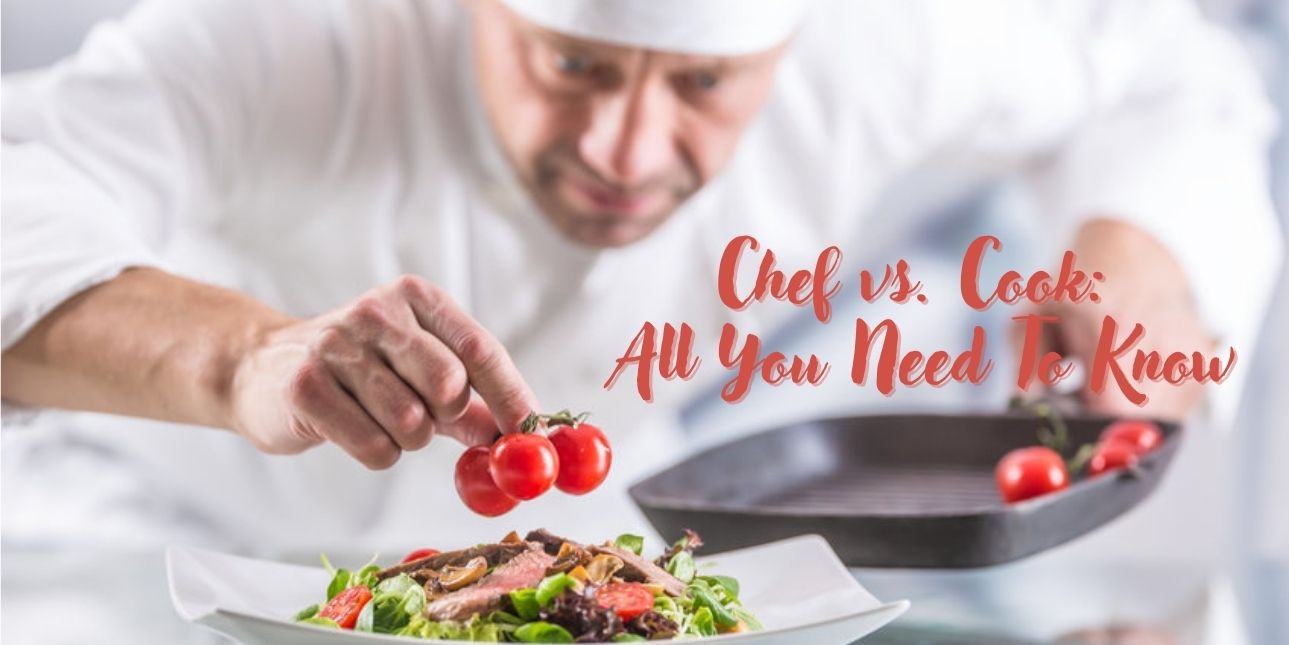 While the difference between a chef and a cook might be delineated in culinary settings, there can be a little confusion regarding the job roles and responsibilities due to a few overlapping duties. There exist several misconceptions about these differences in the kitchen hierarchy and the various roles that comprise the brigade system implemented in a kitchen. While each role has dictionary definitions, it’s important to understand that ground realities differ and these positions are quite dynamic.

The differences between a chef vs. cook, in simple terms, are that a chef has studied and understood the intricacies of flavor, ingredients, their compositions, and methods of balancing them to create recipes and food. On the other hand, cooks replicate and follow existing recipes to prepare food. However, since these are bare-bones definitions, we detail the differences between a chef vs. cook in the sections of the article that follow to give you a better idea about who does what in a commercial kitchen setup.

Chef vs. Cook: What Entails a Chef’s Duties?

The basic difference involves the level of training a chef undergoes before entering the kitchen in a professional capacity. Chefs often work in dedicated food service establishments, and sometimes in personal capacities. They undergo both classroom and extensive periods of practical training before they make dishes and craft menus. Chefs work with fresh ingredients and prepare food right from scratch, and are also involved in the supervision of junior chefs and line cooks. An important distinction if you’re confused about a cook or chef involves recipes and how they follow them. Chefs can cook without referring to a recipe since they’re trained to know the combinations of ingredients and their properties.

Chefs also regularly experiment with existing recipes to add their creative twist to them, and the job involves a fairly large amount of creative freedom. The cook and chef difference is also well-demarcated when it comes to menu curation and the creation of meal plans. Chefs either partially or wholly design menus for foodservice establishments after taking into account inventory, assessment of existing restaurant equipment such as ranges, walk-in equipment, or fryers, and supervision of staff. They may work with restaurant managers to bring changes or improvements to the menu. Professional culinary training also allows chefs to specialize in different cuisines and types of meals to further enhance their skills. Chefs specialize in pastries & confections (Patissier), sauces (Saucier), grilled foods (Grillardin), or salads (Garde Manger). Chefs also take up several management positions and oversee the entire kitchen operation by supervising the cooks and other chefs under them. Some hierarchical positions of chefs include:

Cooks with years of extensive experience, and those who train under established chefs as apprentices are also conferred with the chef title, and this acts as an alternative pathway to professional culinary education in certain countries.

Chef vs. Cook: The Duties of A Cook

Cooks are culinary workers that perform duties in both dedicated food service establishments, and in institutional kitchens such as those in hospitals, corporate workplaces, & school cafeterias. An important distinction when it comes to the differences between a chef and a cook is that while professional training is almost always a must for the former, it isn’t a pre-requisite for the latter. While there might be several professionally trained cooks, professional training does not always factor into an entry-level cook’s requirements. Cooks are often engaged in assembling and preparing recipes given to them by chefs. These professionals also rotate different positions in a commercial kitchen and are trained to be well-rounded in all the different activities.

Cooks are usually limited to cooking activities and are not concerned with the administrative aspects of running a food service business. They're rotated across stations or are deputed to wherever there might be a requirement. They may also undertake and assist with other activities such as backhouse operations and ware wash. The cook’s role in the kitchen relies heavily upon the nature of the establishment they work for - an important cook and chef difference. Every cook can be trained to follow recipes that are unique to the establishment. Cooks during any particular shift can prepare either complete meals or specific courses in a meal based on the stations they’re assigned to and the menu for that particular day. The entire staff of cooks forms the backbone of the commercial food operation and is responsible for ensuring that all of the chefs’ recipes are implemented based on their instructions and preferences. Cooks too are of many types based on their levels of experience and seniority, some of them include:

Despite the differences in the responsibilities of chefs vs. cooks, both roles have overlapping duties in the kitchen. However, it is important to note that a cook’s responsibilities end with the role of cooking in a kitchen. On the other hand, chefs undergo dedicated training for cooking, management, and foodservice administration - something that allows them a greater deal of flexibility in their job, albeit with a higher level of responsibility. Chef training is also more structured and takes longer to complete. This is a reason why chefs are placed higher on the kitchen hierarchy and in the brigade system. That being said, both these positions require dedication, hard work, and creativity so that the overall success of the operation is ensured.